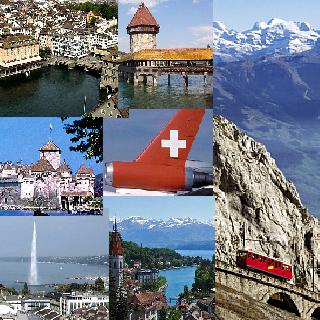 This tour starts and ends in Zurich.
Switzerland is in the heart of Europe, yet not part of the European Union. One of the many contradictions of that country, which is in fact a concentrate of Europe by its multitude of cultures and languages. Explore medieval and classic cities, admire the serene lakes, climb the snow-capped mountains; all that with peace away from the hustle and bustle of other parts of Europe. Maybe the ultimate privately guided tour in Europe.

The Lion of Lucerne is a dramatic monument set into a quiet space with trees and a pond; all who visit feel the intense sadness, but also a sense of sanctuary and reflection. An inscription that reads, “To the loyalty and bravery of the Swiss” explains only briefly the purpose of this monument. Referring to a regiment of Swiss mercenaries who were serving the French royal family in Paris at the time of the French Revolution, the dedication is a nod of respect to the roughly 800 men who died in 1792 when the royal residences were sacked.

The monument was designed by Danish sculptor, Bertel Thorvalsen, and hewn by Lukas Ahorn from 1820-21 at a former sandstone quarry near Lucerne in Switzerland. The method of carving makes the reclining lion’s figure protrude naturally from the low-lying cliff, and appears as thought the lion s sleeping in a shallow cave. Upon closer inspection, it becomes clear that the majestic lion has been pierced by a spear and the pained expression on its face is that of a proud being in the throes of death.

Measuring 10 metres wide by 6 metres high, the lion is large and impressive. American writer, Mark Twain, penned his observations of the Lion of Lucerne Monument: “This is the most mournful and moving piece of stone in the world.” For all its sad history, the Lucerne Lion Monument is a place of great beauty and tranquility, ideal for meditation and quiet relaxation.