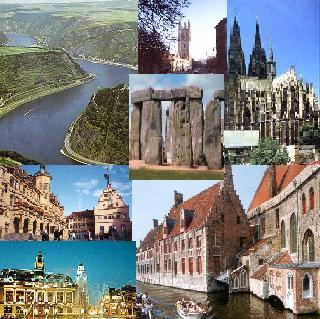 This tour starts in Frankfurt and ends in London.
This tour combines cities, landscape and interesting places in Germany, Belgium and England. Some of the highlights are: historical cities - castles - churches - Loreley Valley - boat trip on canals of Brugge - transfer from Calais in France to Dover in England - Stonehenge. Your personal tour leader chauffeurs and assists you at all times; private local guides provide interesting commentaries about landmarks, history, arts and much more. A worry-free way to discover the Continent on one of our custom-made tours of Europe.

Cologne is situated on the beautiful Rhine River. Locals hypothesize that the legacy of Italian blood and culture in Cologne, colonized by the Romans more than 1500 years ago, makes the people more jovial and lighthearted. Cologne is the largest city on the Rhine. "Kolsch" is not only the dialect spoken here but, also the name of their own top-fermented beer. There are more than 4,000 pubs, restaurant's and brewery taverns in Cologne.

Unlike many of the world's large cities, Cologne, with a population of over a million, gets better every day, there are more things to do and see, more new and innovative buildings, and green spaces. Cologne is a major hub of business and industry, the self-styled commercial center of the West. The title is one that the city might have claimed as far back as the Middle Ages, for then and now the Rhine was one of Western Europe's main trade routes. It was also a leading member of the Hanseatic League.

The Romans left a lasting imprint on Cologne. The remains of their walls and buildings are scattered throughout the central area, and the layout of the city still reflects its Roman heritage. It is such a beautiful city. The best panoramic view is right across the river in the district of Deutz or from one of the bridges especially at night when the Cathedral is illuminated. You should certainly, if travelling through Germany, make Cologne one of your stops.

The major sightseeing attractions of this ancient city lie within the Altstadt (Old Town), the section along the Rhine in the shape of a semicircle. The streets enclosing the Altstadt are called rings. They follow the route of the original medieval city wall, remnants of which today remain in three gates, which now houses museums and depots. Cutting through the center of town is the Hohestrasse; it is a straight street connecting the north and south Roman Gates. A walk from the Cathedral to Friesenplatz or Rudolfplatz, whether on a sightseeing or a beer-drinking tour, is a good way to explore the inner city. The main shopping artery of Cologne is so narrow, that cars are not allowed, that means pedestrian friendly, which is so enjoyable when you are able to go from one luxury boutique or department store to the next without having to worry about cars.

The silhouette of the cathedral is very prominent as you cross any of Cologne's three major bridges spanning the Rhine, the Hohenzollernbrucke, the Deutzer Brucke and the Severins Brucke. Hohestrasse street runs south into Gürzenichstrasse; if you follow that west it becomes Schildergasse, which is another pedestrian zone leading into the huge Neumarkt area. Most of the hotels, shops, nightlife and sightseeing attractions lie within this central area, and are therefore within walking distance of one another.