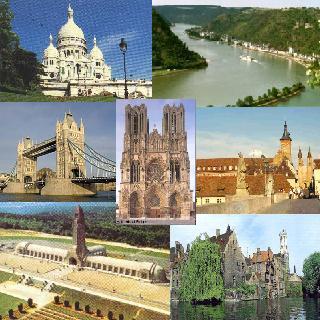 This tour starts and ends in London.
On this Europe tour, enjoy a mixture of interesting cities with their sights and sounds, as well as breathtaking landscapes in England, France, Germany and Belgium. You are constantly chauffeured and assisted by your personal tour leader. Private local guides introduce you to the history of Europe and its capitals through the most important buildings, interesting places, museums, churches, picturesque landscapes and much more.

An inherent part of the vibrancy of Paris, and located at the 18th arrondissement, the Village of Montmartre has long be a haven for esthetes and artists. In its day, Montmartre has been home to the likes of Edgar Degas, Pablo Picasso, Vincent Van Gough and Pierre-Auguste Renoir. Today, it remains a throwback to the artistic past of Paris and a place caught in time. Now boasting modern amenities, Montmartre is integral to Paris, but is a village unto itself.

Situated on a hillside northeast of downtown, Montmartre has a picturesque beauty that has been captured numerous times on film, most notably, “Amélie” and “La Vie en Rose”. Its charm is distinctive, with quaint cobblestone streets, artists’ studios, windmills and a sophisticated café culture. It even has a vineyard, part of the village’s annual wine festival celebrations. This is home to the famed Moulin Rouge, essential to the cabaret entertainment that thrives all around Paris.

Perched atop the hill is Sacré Coeur Basilica, a Roman-Byzantine style church that went under construction in 1876 and to the present retains its pristine white walls. Observers have described is as “white dove aloft”. Its varied architectural details include what is regarded as one of the largest clock towers in the world, but it’s the ethereal beauty of the building and its lofty location that deliver its magical quality; it stands even taller than the Eiffel Tower.