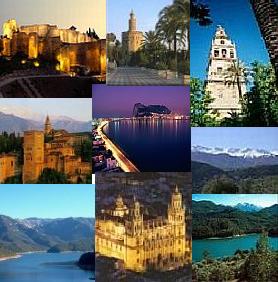 This tour starts in Seville and ends in Seville.
This tour combines landscapes, world's heritage monuments and interesting places in Andalusia. Some of the highlights are: historic monuments - natural reserves - museums - amazing landscapes. Your personal tour leader chauffeurs and assists you at all times; private local guides provide interesting commentaries about landmarks, history of Andalusia, arts and much more. Enjoy this part of Europe on a worry-free chauffeured Europe tour made especially for you.

Known as the Great Mosque of Cordoba, the Mosque-Cathedral of Cordoba is a must-see for a travel enthusiast, history-lover, or anyone with an interest in culture and history. Considered a feat of Moorish architecture, the structure not only features rare architecture, but also shows the cultural transition of Cordoba. Originally a temple of Christian origin, the structure was replaced by the Grand Mosque of Cordoba, when Spain was conquered by the Muslims in 711. Cordoba returned to Christianity in 1236 and the structure was converted to a Roman Catholic Church. Experience the lifestyle of the people through the centuries in this private luxury tour of Spain. Our chauffeur-guide will not only show you the Hypostyle Hall, Mihrab, Horseshoe Arch, and Dome, but also share undocumented stories known as part of the local folklore. Famed for the exquisitely decorated elements, each structure showcases a dazzling array of architectural styles and the cultural thinking of each era. See the prayer hall, Hypostyle Hall, made of stone and brick, which is magnified by its repeating geometry including symmetrical arches, the Mihrab, the focal point of the prayer hall, which identifies the direction of Mecca, and the dazzling Dome. The Horseshoe Arch is reminiscent of the Visigoths, who ruled during the era between the Romans and the Umayyads.